The Co-ordination for Gender Research organized the 2nd Chinese-Danish research symposium, at the Nordic Centre, Fudan University in Shanghai. The seminar was held 23th of October 2013, under the title Gender Dynamics in the 21st century: Gender, Class, Culture in a globalizing world. 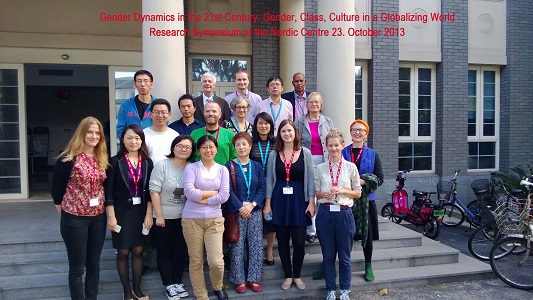 The symposium participants gathered outside The Nordic Centre.

The theme of the symposium reflected that gender studies are becoming more complex while aiming at including intersecting themes, such as ethnicities, class, age, sexuality. The symposium's ambition was to bring scholars from Denmark and China together to exchange knowledge and research interests on the intersecting fields of gender, class and culture studies. Five sessions with a total of 13 speakers were held during the one day symposium. And themes such as legal and social activism, welfare and environment, globalization, new ways of doing middle-class as well as family structures, gender roles and identities, were presented, compared and discussed from Eastern and Western perspectives.  There were around  35 participants in the symposium, faculty members, as well as PhD and MA students from UCOP, Fudan,andShanghai Universisties as well as participants from China Academy of Social Sciences and Peking University.

The symposium will be followed up by the set up of educational and faculty exchange programs between UCOP, Peking Univeristy, and Fudan Unviersity. Besides a   research network will be set up  and a selection of papers from the seminars will be published in a coming volume the gender research journal Kvinder, Køn & Forskning (Women, Gender & Research. The plan is to publish the volume in  2014 in English, and possibly also in Chinese.